When talking to people about the Christian faith, one of the areas people struggle to understand and accept is the whole area to do with forgiveness.  Yet as Christians we are called to forgive others, just as we have been forgiven by God.

But many people find this a difficult thing to do, because they think that to forgive someone who has hurt them, in effect sends out the message,


But this is not what forgiveness is about.  We are called to forgive others, because it is linked to being forgiven ourselves.  Jesus taught us to prayer Forgive us AS WE forgive others.  If we refuse to forgive those who have hurt us, it will have an impact upon our relationship with God.  Jesus said, “For if you forgive men when they sin against you, your heavenly Father will also forgive you. But if you do not forgive men their sins, your Father will not forgive your sins.”

Forgiveness is also linked to our own spiritual growth.  The more we learn and practice forgiveness, the more we become like God, who himself is merciful and forgiving.

And forgiveness is in our own best interest.  If we hold on to resentment, anger or hatred, it can damage us, far more than the person we are unwilling to forgive.

To truly forgive those who have hurt us, is not easy, and as our reading indicates it is rarely a one of event, but something we need to keep on doing again and again.  The rabbis taught that we should forgive those who offend us three times.  Peter, in trying to be especially generous asked Jesus if seven (the perfect number) was enough times to forgive someone.  But Jesus answered, “Seventy times seven,” meaning should always forgive those who are truly repentant, no matter how many times they ask.

One of the most powerful stories of forgiveness I have come across is that of Corrie Ten Boom. 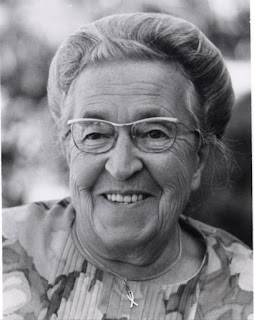 Corrie, a Christian, was sent to Ravensbruck concentration camp along with 9 members of her family, for sheltering Jews feeling from Nazi persecution in Holland.  Although Corrie survived the camp, many of her family didn’t.  In 1947 she came face to face with one of her former guards, and this is what she wrote about that encounter.

“Memories of the concentration camp came back with a rush: the huge room with its harsh overhead lights, the pathetic pile of dresses and shoes in the center of the floor, the shame of walking naked past this man. I could see my sister's frail form ahead of me, ribs sharp beneath the parchment of skin.

Now he was in front of me, hand thrust out: "A fine message, fraulein! How good it is to know that, as you say, all our sins are at the bottom of the sea!" It was the first time since my release that I had been face to face with one of my captors and my blood seemed to freeze.

"You mentioned Ravensbruck in your talk," he was saying. "I was a guard there. But since that time I have become a Christian. I know that God has forgiven me for the cruel things I did there, but I would like to hear it from your lips as well. Fraulein--" again the hand came out--"will you forgive me?"

And I stood there--and could not. My sister Betsie had died in that place--could he erase her slow terrible death simply for the asking? It could not have been many seconds that he stood there, hand held out, but to me it seemed hours as I wrestled with the most difficult thing I had ever had to do. For I had to do it--I knew that.

Still I stood there with the coldness clutching my heart. But forgiveness is an act of the will, and the will can function regardless of the temperature of the heart. "Jesus, help me!" I prayed silently. "I can lift my hand. I can do that much. You supply the feeling." And so woodenly, mechanically, I thrust my hand into the one stretched out to me. And as I did, an incredible thing took place. The current started in my shoulder, raced down my arm, sprang into our joined hands. And then this healing warmth seemed to flood my whole being, bringing tears to my eyes. "I forgive you, brother!" I cried. "With all my heart!"

For a long moment we grasped each other's hands, the former guard and former prisoner. I had never known God's love so intensely as I did then.

God commands us to forgive because he loves us.  He knows how refusal to forgive leads to the corrosive and destructive influence of bitterness, and causes us to miss out on the abundant life that Jesus came to give us.

The greatest symbol we have for forgiveness is the cross of Jesus.  The cross also reveals to us just how costly forgiveness can be, but also how necessary it is.  In Christ’s suffering on the cross that not only do we see true love revealed, but also the power of forgiveness to bring healing & wholeness.  This is what Corrie ten Boom discovered when she met her former capture, and this is what we too can discover if we are people who are prepared to forgive.