Good Friday Hour At The Cross 2016 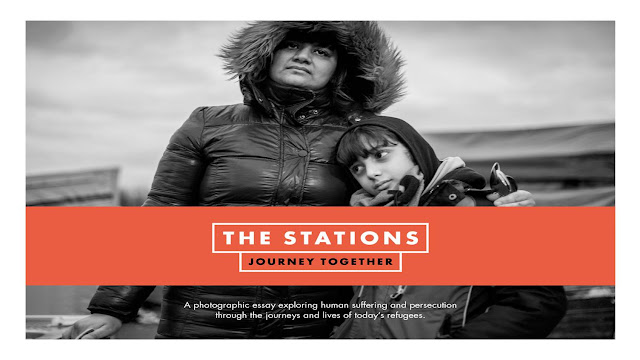 Welcome to our service of prayer and reflection for Good Friday.

Today Europe faces the largest migration of people since the Second World War, as hundreds of thousands of people flee poverty, war and persecution.

The stations of the cross are a series of images which tell the story of Christ’s crucifixion.  Today in our service we are going to be using an artistic re-interpretation of the traditional 'stations of the cross', using images and stories of refugees taken in Lebanon, Calais and the UK, to help us reflect on Jesus’ death on the cross.

So let us begin our service….

gather round
I have a story to tell
of one who reached inside himself
and took a handful of love
like a pile of stardust and said:
this is for you
it is all you need
it is all you will ever need
there is enough here
to change the whole world
take it


many laughed at him
mocked him
and ignored the invitation

36 Then Jesus went with his disciples to a place called Gethsemane, and he said to them, “Sit here while I go over there and pray.” 37 He took Peter and the two sons of Zebedee along with him, and he began to be sorrowful and troubled. 38 Then he said to them, “My soul is overwhelmed with sorrow to the point of death. Stay here and keep watch with me.”
39 Going a little farther, he fell with his face to the ground and prayed, “My Father, if it is possible, may this cup be taken from me. Yet not as I will, but as you will.”
40 Then he returned to his disciples and found them sleeping. “Couldn’t you men keep watch with me for one hour?” he asked Peter. 41 “Watch and pray so that you will not fall into temptation. The spirit is willing, but the flesh is weak.”
42 He went away a second time and prayed, “My Father, if it is not possible for this cup to be taken away unless I drink it, may your will be done.”
43 When he came back, he again found them sleeping, because their eyes were heavy. 44 So he left them and went away once more and prayed the third time, saying the same thing.
45 Then he returned to the disciples and said to them, “Are you still sleeping and resting? Look, the hour has come, and the Son of Man is delivered into the hands of sinners. 46 Rise! Let us go! Here comes my betrayer!” 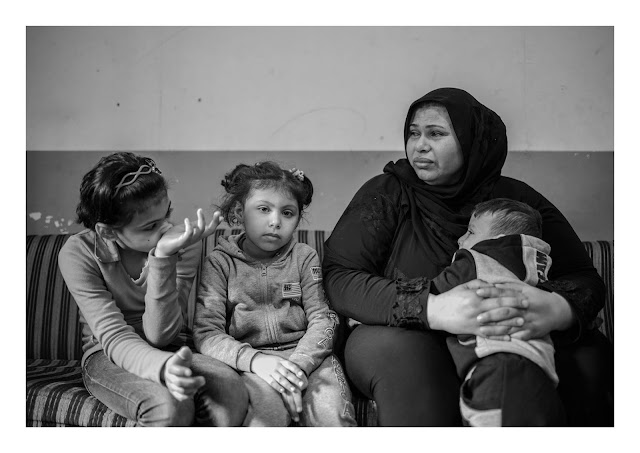 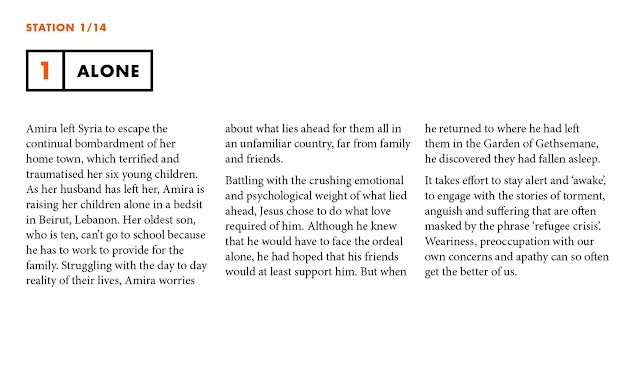 47 While he was still speaking, Judas, one of the Twelve, arrived. With him was a large crowd armed with swords and clubs, sent from the chief priests and the elders of the people. 48 Now the betrayer had arranged a signal with them: “The one I kiss is the man; arrest him.” 49 Going at once to Jesus, Judas said, “Greetings, Rabbi!” and kissed him. 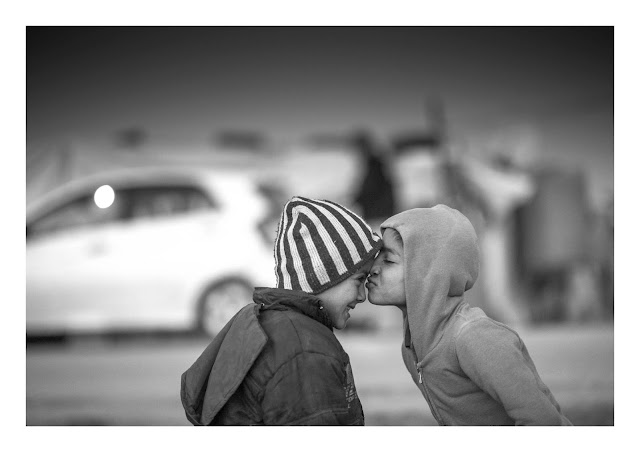 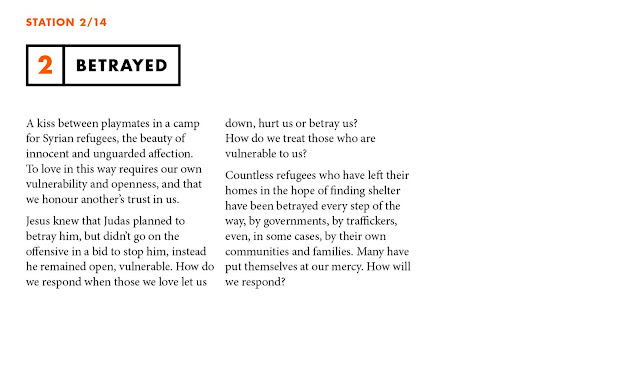 57 Those who had arrested Jesus took him to Caiaphas the high priest, where the teachers of the law and the elders had assembled…  59 The chief priests and the whole Sanhedrin were looking for false evidence against Jesus so that they could put him to death. 60 But they did not find any, though many false witnesses came forward.
Finally two came forward 61 and declared, “This fellow said, ‘I am able to destroy the temple of God and rebuild it in three days.’”
62 Then the high priest stood up and said to Jesus, “Are you not going to answer? What is this testimony that these men are bringing against you?” 63 But Jesus remained silent.
The high priest said to him, “I charge you under oath by the living God: Tell us if you are the Messiah, the Son of God.”
64 “You have said so,” Jesus replied. “But I say to all of you: From now on you will see the Son of Man sitting at the right hand of the Mighty One and coming on the clouds of heaven.”
65 Then the high priest tore his clothes and said, “He has spoken blasphemy! Why do we need any more witnesses? Look, now you have heard the blasphemy. 66 What do you think?”
“He is worthy of death,” they answered. 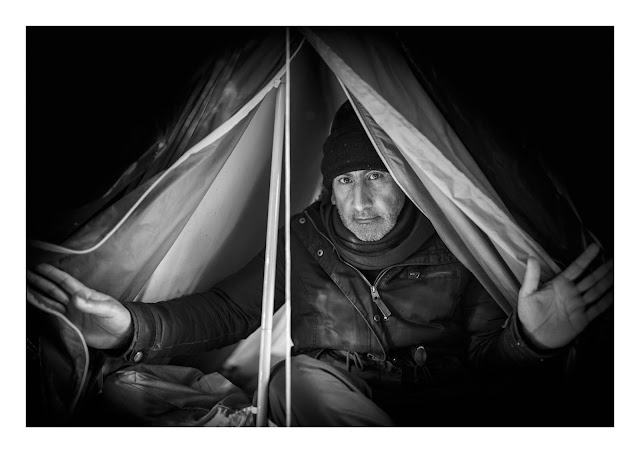 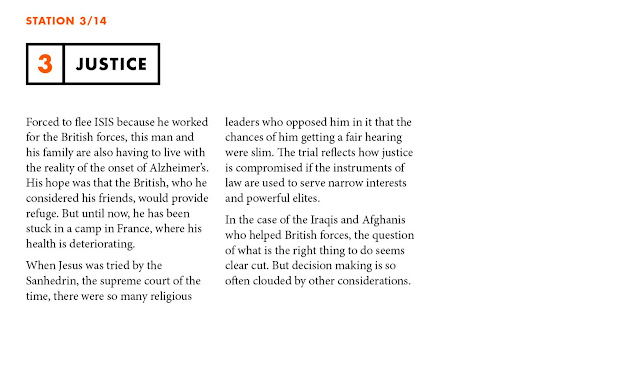 69 Now Peter was sitting out in the courtyard, and a servant girl came to him. “You also were with Jesus of Galilee,” she said.
70 But he denied it before them all. “I don’t know what you’re talking about,” he said.
71 Then he went out to the gateway, where another servant girl saw him and said to the people there, “This fellow was with Jesus of Nazareth.”
72 He denied it again, with an oath: “I don’t know the man!”
73 After a little while, those standing there went up to Peter and said, “Surely you are one of them; your accent gives you away.”
74 Then he began to call down curses, and he swore to them, “I don’t know the man!”
Immediately a rooster crowed. 75 Then Peter remembered the word Jesus had spoken: “Before the rooster crows, you will disown me three times.” And he went outside and wept bitterly. 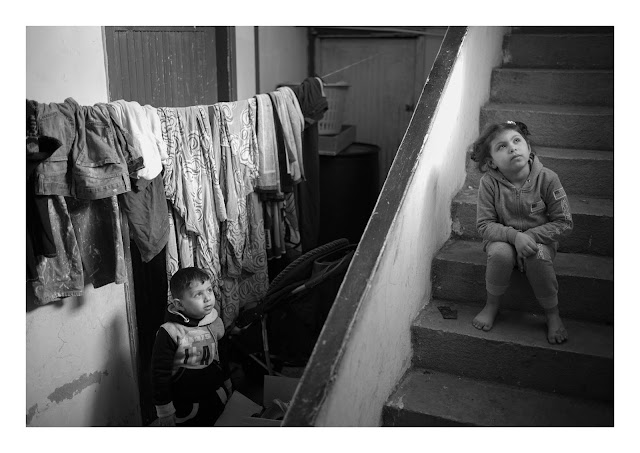 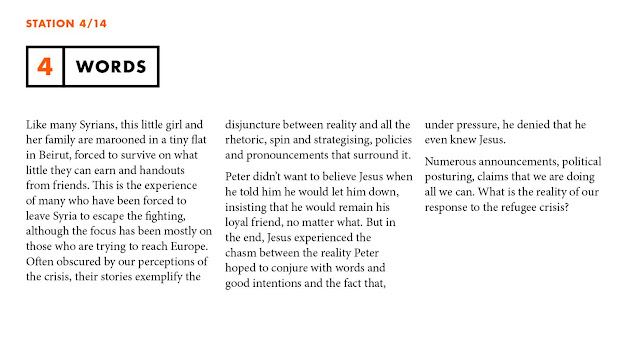 27 Early in the morning, all the chief priests and the elders of the people made their plans how to have Jesus executed. 2 So they bound him, led him away and handed him over to Pilate the governor.
11  Jesus stood before the governor, and the governor asked him, “Are you the king of the Jews?”
“You have said so,” Jesus replied.
12 When he was accused by the chief priests and the elders, he gave no answer. 13 Then Pilate asked him, “Don’t you hear the testimony they are bringing against you?” 14 But Jesus made no reply, not even to a single charge—to the great amazement of the governor.
15 Now it was the governor’s custom at the festival to release a prisoner chosen by the crowd. 16 At that time they had a well-known prisoner whose name was Jesus Barabbas. 17 So when the crowd had gathered, Pilate asked them, “Which one do you want me to release to you: Jesus Barabbas, or Jesus who is called the Messiah?” 18 For he knew it was out of self-interest that they had handed Jesus over to him.
20 But the chief priests and the elders persuaded the crowd to ask for Barabbas and to have Jesus executed.
21 “Which of the two do you want me to release to you?” asked the governor.
“Barabbas,” they answered.
22 “What shall I do, then, with Jesus who is called the Messiah?” Pilate asked.
They all answered, “Crucify him!”
23 “Why? What crime has he committed?” asked Pilate.
But they shouted all the louder, “Crucify him!”
24 When Pilate saw that he was getting nowhere, but that instead an uproar was starting, he took water and washed his hands in front of the crowd. “I am innocent of this man’s blood,” he said. “It is your responsibility!”
25 All the people answered, “His blood is on us and on our children!”
26 Then he released Barabbas to them. But he had Jesus flogged, and handed him over to be crucified. 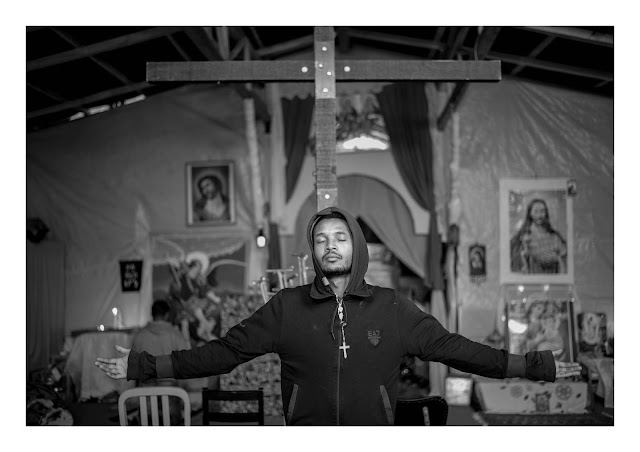 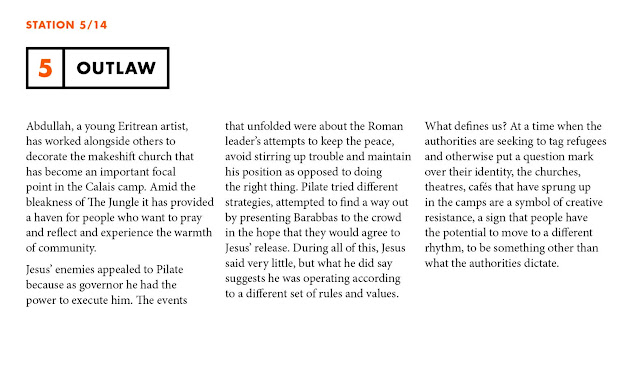 27 Then the governor’s soldiers took Jesus into the Praetorium and gathered the whole company of soldiers around him. 28 They stripped him and put a scarlet robe on him, 29 and then twisted together a crown of thorns and set it on his head. They put a staff in his right hand. Then they knelt in front of him and mocked him. “Hail, king of the Jews!” they said. 30 They spit on him, and took the staff and struck him on the head again and again. 31 After they had mocked him, they took off the robe and is love unknown put his own clothes on him. Then they led him away to crucify him. 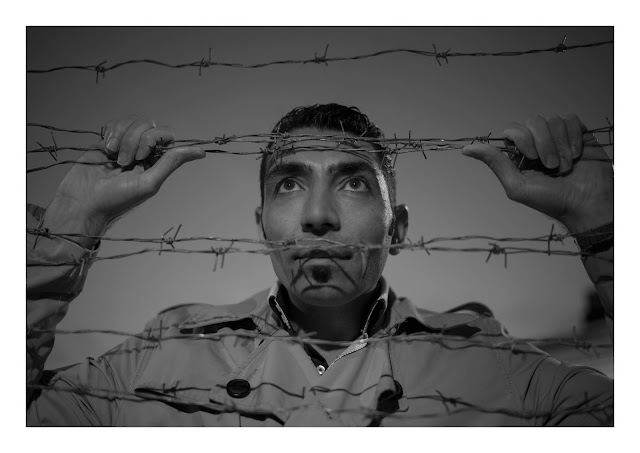 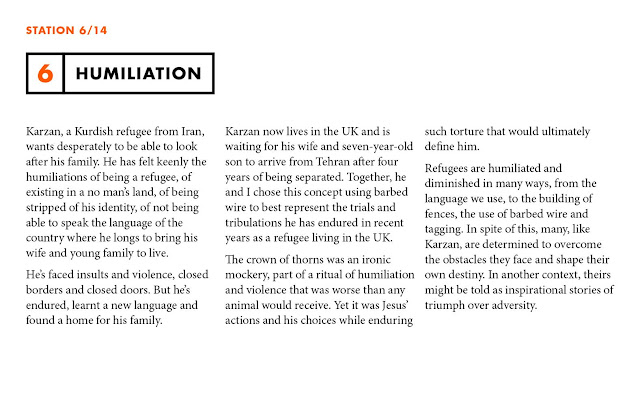 So the soldiers took charge of Jesus. 17 Carrying his own cross, he went out to the place of the Skull (which in Aramaic is called Golgotha). 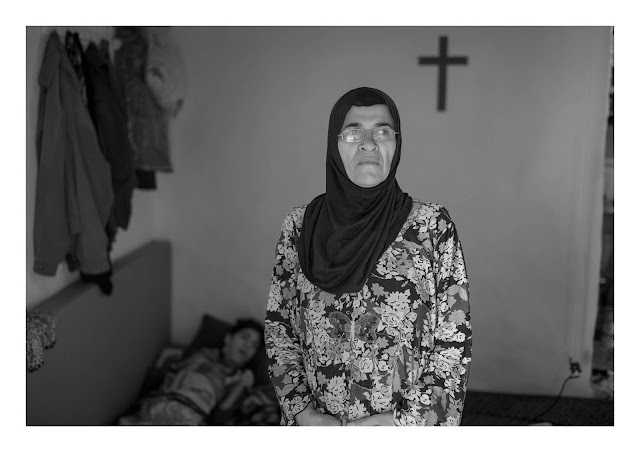 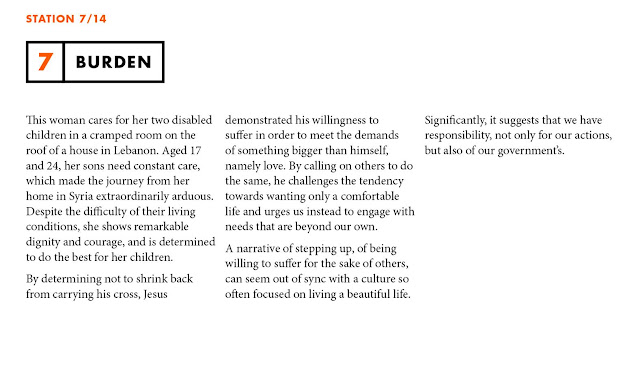 26 As the soldiers led him away, they seized Simon from Cyrene, who was on his way in from the country, and put the cross on him and made him carry it behind Jesus. 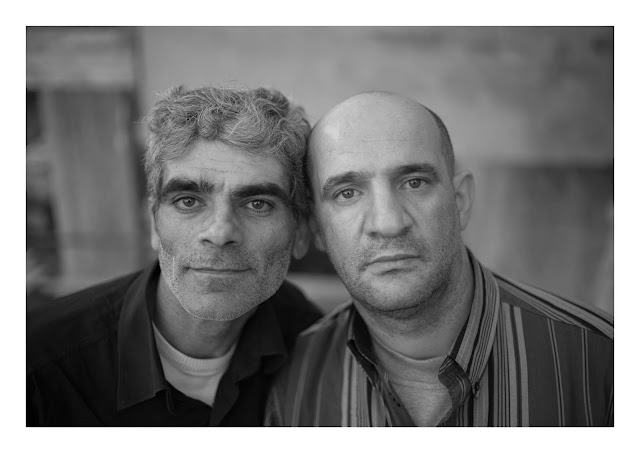 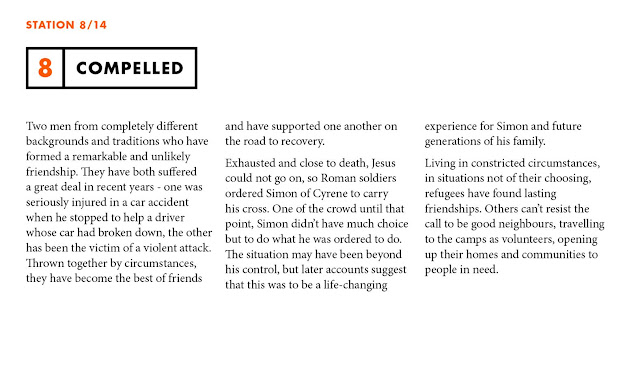 They brought Jesus to the place called Golgotha (which means “the place of the skull”). 23 Then they offered him wine mixed with myrrh, but he did not take it. 24 And they crucified him. 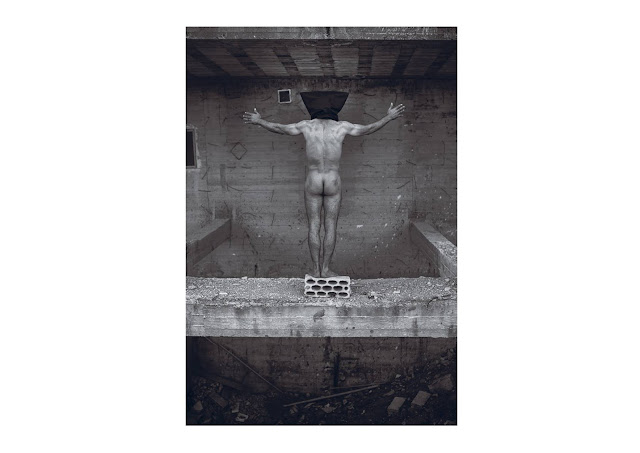 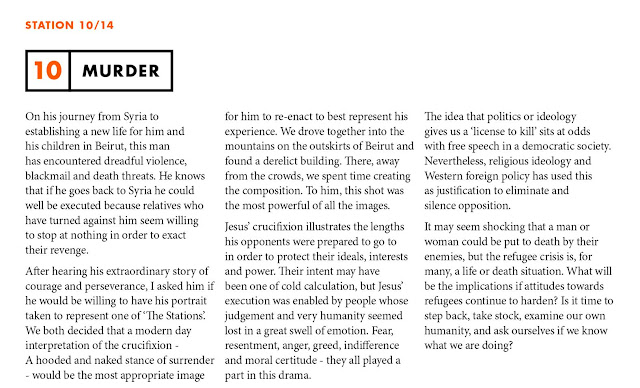 44 It was now about noon, and darkness came over the whole land until three in the afternoon, 45 for the sun stopped shining. And the curtain of the temple was torn in two. 46 Jesus called out with a loud voice, “Father, into your hands I commit my spirit.” When he had said this, he breathed his last. 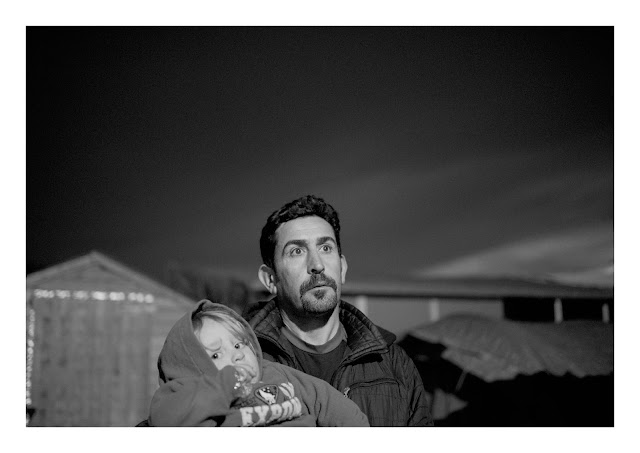 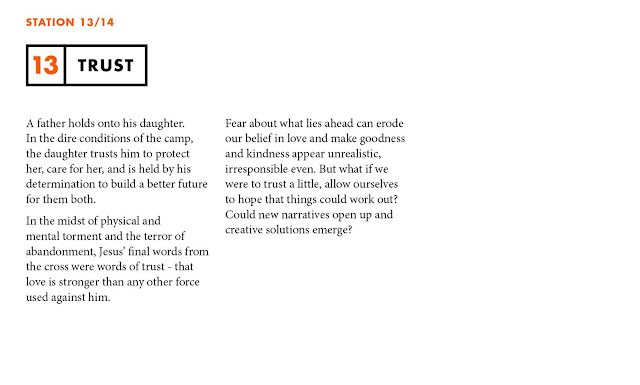 Most merciful God your blessed son, our Saviour, was betrayed, whipped, and his face spat upon.  Grant us grace to endure the sufferings of the present time, to remember those who suffer, especially refugees, and to overcome all that seeks to overwhelm us, confident of the glory that shall yet be revealed; through Jesus Christ, our Redeemer. Amen.


May Jesus Christ, who for our sake became obedient unto death, even death on a cross, keep you and strengthen you, now and forever.  Amen.
Posted by Unknown at 14:55 No comments: