For the athletes participating in the Olympic Games in London, years of training will have been spent preparing for this event.  During the games some athletes will achieve their lifetime’s ambition of winning a gold medal, but for others their Olympic dreams will end in bitter disappointment.  As Paul writes in the New Testament ‘Do you not know that in a race all the runners run, but only one gets the prize?’

Disappointment and failure is something that we all face in life at some point.  The challenge for the athlete and for each one of us in times such as this is how do we respond to such setbacks? 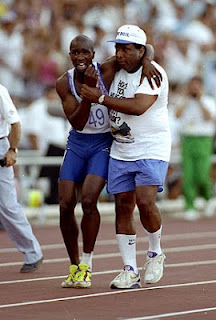 One of the most memorable Olympic moments was at the Barcelona games in 1992.  Derek Redmond, who held the British record for the 400 metres sprint, and won gold medals in the 4x400 metres relay at the World Championships, European Championships and Commonwealth Games, was competing in the semi finals of the 400 metres, when he tore his hamstring.  He knew instantly that his Olympic dream was over, but he was also determined to finish the race.

To the amazement of the crowd, Derek Redmond slowly started hobbling down the track to the finishing line.  His father Jim, who had been watching from the stands, ran onto the track and put his arm around his son’s waist, and together they finished the race arm in arm to a standing ovation.  Jim Redmond told the press afterwards. “I’m the proudest father alive. I’m prouder of him than I would have been if he had won the gold medal.”

Twenty years after that race, not many people remember who won that semi-final race or who even won the final, but Derek Redmond is still remembered.  Because despite the pain, despite the heartache, despite the disappointment, with the help of his loving dad he finished the race.  He kept going till he reached the finishing line.

In the race of life, we have a loving Heavenly Father, who can help us to face setbacks and disappointments.  He is an ever present help, He will never leave or forsake us. He will hold us close, welcoming us home as we cross our final finish line.