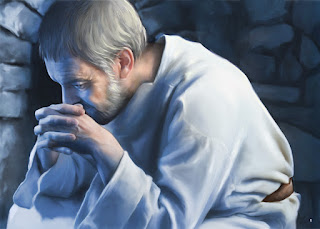 Now the word of the Lord came to me saying, “Before I formed you in the womb I knew you, and before you were born I consecrated you; I appointed you a prophet to the nations.” Then I said, “Ah, Lord God! Truly I do not know how to speak, for I am only a boy.” But the Lordsaid to me, “Do not say, ‘I am only a boy’; for you shall go to all to whom I send you, and you shall speak whatever I command you, Do not be afraid of them, for I am with you to deliver you, says the Lord.” Then the Lord put out his hand and touched my mouth; and the Lord said to me, “Now I have put my words in your mouth. See, today I appoint you over nations and over kingdoms, to pluck up and to pull down, to destroy and to overthrow, to build and to plant.”

The word of the Lord came to me, saying, “Jeremiah, what do you see?” And I said, “I see a branch of an almond tree.” Then the Lord said to me, “You have seen well, for I am watching over my word to perform it.”The word of the Lord came to me a second time, saying, “What do you see?” And I said, “I see a boiling pot, tilted away from the north.” Then the Lord said to me: Out of the north disaster shall break out on all the inhabitants of the land. For now I am calling all the tribes of the kingdoms of the north, says the Lord; and they shall come and all of them shall set their thrones at the entrance of the gates of Jerusalem, against all its surrounding walls and against all the cities of Judah. And I will utter my judgments against them, for all their wickedness in forsaking me; they have made offerings to other gods, and worshiped the works of their own hands. But you, gird up your loins; stand up and tell them everything that I command you. Do not break down before them, or I will break you before them. And I for my part have made you today a fortified city, an iron pillar, and a bronze wall, against the whole land—against the kings of Judah, its princes, its priests, and the people of the land. They will fight against you; but they shall not prevail against you, for I am with you, says the Lord, to deliver you.

The word of the Lord came to me, saying: Go and proclaim in the hearing of Jerusalem, Thus says the Lord: I remember the devotion of your youth, your love as a bride, how you followed me in the wilderness, in a land not sown. Israel was holy to the Lord, the first fruits of his harvest. All who ate of it were held guilty; disaster came upon them, says the Lord. Hear the word of the Lord, O house of Jacob, and all the families of the house of Israel. Thus says the Lord: What wrong did your ancestors find in me that they went far from me, and went after worthless things, and became worthless themselves? They did not say, “Where is the Lord who brought us up from the land of Egypt, who led us in the wilderness, in a land of deserts and pits, in a land of drought and deep darkness, in a land that no one passes through, where no one lives?” I brought you into a plentiful land to eat its fruits and its good things. But when you entered you defiled my land, and made my heritage an abomination. The priests did not say, “Where is the Lord?” Those who handle the law did not know me; the rulers transgressed against me; the prophets prophesied by Baal, and went after things that do not profit.

Therefore once more I accuse you, says the Lord, and I accuse your children’s children. Cross to the coasts of Cyprus and look, send to Kedar and examine with care; see if there has ever been such a thing.Has a nation changed its gods, even though they are no gods? But my people have changed their glory for something that does not profit. Be appalled, O heavens, at this, be shocked, be utterly desolate, says theLord, for my people have committed two evils: they have forsaken me, the fountain of living water, and dug out cisterns for themselves, cracked cisterns that can hold no water.

Is Israel a slave? Is he a homeborn servant? Why then has he become plunder? The lions have roared against him, they have roared loudly. They have made his land a waste; his cities are in ruins, without inhabitant. Moreover, the people of Memphis and Tahpanhes have broken the crown of your head. Have you not brought this upon yourself by forsaking the Lord your God, while he led you in the way? What then do you gain by going to Egypt, to drink the waters of the Nile? Or what do you gain by going to Assyria, to drink the waters of the Euphrates?Your wickedness will punish you, and your apostasies will convict you. Know and see that it is evil and bitter for you to forsake the Lord your God; the fear of me is not in you, says the Lord God of hosts.

For long ago you broke your yoke and burst your bonds, and you said, “I will not serve!” On every high hill and under every green tree you sprawled and played the whore. Yet I planted you as a choice vine, from the purest stock. How then did you turn degenerate and become a wild vine? Though you wash yourself with lye and use much soap, the stain of your guilt is still before me, says the Lord God. How can you say, “I am not defiled, I have not gone after the Baals”? Look at your way in the valley; know what you have done— a restive young camel interlacing her tracks, a wild ass at home in the wilderness, in her heat sniffing the wind! Who can restrain her lust? None who seek her need weary themselves; in her month they will find her. Keep your feet from going unshod and your throat from thirst. But you said, “It is hopeless, for I have loved strangers, and after them I will go.” As a thief is shamed when caught, so the house of Israel shall be shamed— they, their kings, their officials, their priests, and their prophets, who say to a tree, “You are my father,” and to a stone, “You gave me birth.” For they have turned their backs to me, and not their faces. But in the time of their trouble they say, “Come and save us!” But where are your gods that you made for yourself? Let them come, if they can save you, in your time of trouble; for you have as many gods as you have towns, O Judah.

Why do you complain against me? You have all rebelled against me, says the Lord. In vain I have struck down your children; they accepted no correction. Your own sword devoured your prophets like a ravening lion. And you, O generation, behold the word of the Lord! Have I been a wilderness to Israel, or a land of thick darkness? Why then do my people say, “We are free, we will come to you no more”? Can a girl forget her ornaments, or a bride her attire? Yet my people have forgotten me, days without number. How well you direct your course to seek lovers! So that even to wicked women you have taught your ways.Also on your skirts is found the lifeblood of the innocent poor, though you did not catch them breaking in. Yet in spite of all these things you say, “I am innocent; surely his anger has turned from me.” Now I am bringing you to judgment for saying, “I have not sinned.” How lightly you gad about, changing your ways! You shall be put to shame by Egypt as you were put to shame by Assyria. From there also you will come away with your hands on your head; for the Lord has rejected those in whom you trust, and you will not prosper through them.

If a man divorces his wife and she goes from him and becomes another man’s wife, will he return to her? Would not such a land be greatly polluted? You have played the whore with many lovers; and would you return to me? says the Lord. Look up to the bare heights, and see! Where have you not been lain with? By the waysides you have sat waiting for lovers, like a nomad in the wilderness. You have polluted the land with your whoring and wickedness. Therefore the showers have been withheld, and the spring rain has not come; yet you have the forehead of a whore, you refuse to be ashamed. Have you not just now called to me, “My Father, you are the friend of my youth— will he be angry forever, will he be indignant to the end?” This is how you have spoken, but you have done all the evil that you could.

KEY THOUGHT
Sin is a big problem, but God has a bigger solution.

CHALLENGE
SIN NOT ONLY BREAKS THE RULES, IT BREAKS YOUR RELATIONSHIP
WITH GOD.
Posted by Unknown at 11:00