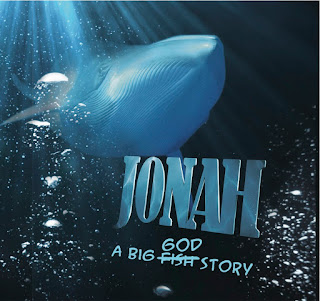 If you ask people to name the best known and most popular stories from the Old Testament, the story of Jonah would undoubtedly come near the top of the list.
It is a wonderful story, which provides a profound illustration of God’s grace and mercy.  Despite its title, the central character isn’t Jonah, but God.  Out of the 46 verses 39 of them actually talk about God.  What we discover from this book is that God is passionate and involved, and also the God of surprises, and that no one is beyond the reach of God’s love.

The book of Jonah is one of the twelve minor prophets of the Old Testament, but it differs from the other prophetic books because it focuses on the man Jonah, rather than his prophetic teaching.  In fact there is only one prophetic oracle in the whole book, which appears in chapter 3:4.

Jonah is referred to as the son of Amittai, which dates Jonah to the 8th century BC.

Jonah was given a special mission, to “Go to the great city of Nineveh and preach against it’ because of its wickedness (Jonah 1:2)

Nineveh was the ancient and most important city of the vast, mighty, powerful Assyrian empire, one of Israel’s greatest enemies.  The ruins of the city can be found on the river Tigris in northern Iraq.

Although Jonah doesn’t say much about Nineveh’s wickedness, we have a better insight into what the city was like from the prophet Nahum.

Woe to the city of blood, full of lies, full of plunder, never without victims!...  Many casualties, piles of dead, bodies without number, people stumbling over the corpses… who enslaved nations by her prostitution and peoples by her witchcraft. (Nahum 3:1, 3)

The Assyrians were a cruel and heartless people - Assyrian engravings depict people being tortured, skulls worn around their necks to show their cruelty. When they took over a town in battle they would take any survivors and they would impale them on stakes in front of the town. This is not a friendly nation or a friendly city (not exactly on the top 10 holiday destinations of the day) – and in 722BC the Assyrians would invade and destroy Israel (see 2 Kings 17).

And yet it was to this city that Jonah was given the instruction to go and warn people of God’s judgement.  As an Israeli, the last place Jonah would have wanted to visit would have been Nineveh – if it was today, Jonah would probably have featured on BBC2 series ‘The Toughest Place To Be’ series.  Like others in Israel, Jonah had grown up hating the
Assyrians and fearing them in equal measure.

And so instead of going to Nineveh, Jonah attempted to run away from the Lord, by boarding a ship heading to Tarshish on the coast of Spain, going as far away from Nineveh as he could get.

Many reasons have been given for the reason Jonah fled.  Some scholars say it was because he was afraid, others because the task was too difficult, and some say it is because Jonah ultimately knew that God would forgive the people of Nineveh, and this was something Jonah could not accept.  The answer may of course be that it was all these things that caused Jonah to flee.  But fear undoubtedly played an important part in his decision.

5-year old Johnny was in the kitchen as his mother made supper. She asked him to go into the pantry and get her a can of tomato soup, but he didn't want to go in alone. "It's dark in there and I'm scared." She asked again, and he persisted. Finally she said, "It's OK--Jesus will be in there with you." Johnny walked hesitantly to the door and slowly opened it. He peeked inside, saw it was dark, and started to leave when all at once an idea came, and he said: "Jesus, if you're in there, would you hand me that can of tomato soup?"

Fear is a powerful force, and can also stop us from doing the things God would wish us to do.  The fear of the unknown, the fear of failure, the fear of stepping outside our comfort zone.  Fear can either cause us to flee like Jonah, or lead to atrophy.

Dr Stanley Jones, a Methodist missionary and theologian said “I am inwardly fashioned for faith, not for fear. Fear is not my native land; faith is. I am so made that worry and anxiety are sand in the machinery of life; faith is the oil. I live better by faith and confidence than by fear, doubt and anxiety. In anxiety and worry, my being is gasping for breath--these are not my native air. But in faith and confidence, I breathe freely--these are my native air.”

Have you ever felt that fear has kept you back from doing what God wanted you to do, such as a call to change behaviour.  A call to be more public with your faith.  A call to forgive someone for the harm they have done to you.  A call to a specific ministry or use of your spiritual gifts.  If so, you need to let learn to trust God, and put your faith in him.
As God spoke to Paul, so he speaks to us all when he says “My grace is sufficient for you.” (1 Cor 12:9)  We should not allow fear to hold us back from what God would want us to do.

Instead of going to Nineveh, Jonah boarded a boat to Tarshish, where he hoped to go to a place he could escape God’s call.  But Jonah’s disobedience to God was to endanger the lives of the ship’s crew.  As he slept, God sent a powerful storm that threatened to sink the boat.

This is a reminder that our sin and disobedience to God not only affects our relationship with God, but can also affect those around us.

Sometimes the troubles that come our way are the stuff of life, things that are common to everyone.  Sometimes, we can face troubles for doing the right thing.  But there are times when trouble comes because we’re not following the voice of God in our lives.

The writer to the Hebrews tells us, “My child, do not make light of the Lord’s discipline,
and do not lose heart when he rebukes you, because the Lord disciplines those he loves, and he punishes everyone he accepts as a child." (Hebrews 12:5)  As a loving parent, God can use discipline to draw us back to himself.

There is a striking contrast between the faith of Jonah and the faith of the sailors on the boat.  Whilst Jonah sleeps below decks, the sailors ‘each cried out to his own god. And they threw the cargo into the sea to lighten the ship.’ (1:5)

When we are purposefully running from the will of God in our lives, it is often like we have fallen asleep in that area of our lives. We put it out of our mind, or “on the back-burner” for a while until God sends a wakeup call, and we are reminded of God’s call on our life, or the promises that we have made to God.

For Jonah the storm literally is a “wake up call”.  He knew that he had disobeyed God, and that the storm was his fault, and that there was no running away from God.

So Jonah instructs the sailors to throw him over board.  Scholars debate whether this was to save the lives of those on board, or whether it was his final way of escaping God’s mission.  He’d rather die than preach to the wicked people of Nineveh.  Whatever the answer, Jonah recognises that he cannot escape or defy God, and get away unscathed.  But even when he tells the sailors to throw him overboard, they still did their best to row back to shore.  For me the sailors are the unsung heroes in this story because they are the ones who showed more concern compassion than Jonah did.  Jonah did not want to warn the people of Nineveh of the coming judgement of God, which could save the lives of thousands.  But these pagan sailors, did all they could to save the life of this one man.
It is not just the concern and compassion of the sailors which shines through in this passage.  It is above all the concern, compassion and love of God.  For the people of Nineveh, for Jonah and also the sailors on the boat.

Because even though Jonah disobeyed God, God used Jonah to help reach out to the sailors.  God is bigger than our mistakes.  Even when we make wrong decisions, whether wilfully or by mistake, God can use them for his glory, like in the case of Jonah, where the sailors came to acknowledge the living God.

God continues to be gracious to this runaway prophet. Instead of leaving him to die, he sends a great fish to swallow him and carry him to land over three days.

Even when we are running from God, and he sends a storm, God will always send us a way out.

There are five lessons to learn from this story:

1) Don’t run from God:     What is God’s call on your life right now – to give your life to him? To step out in faith? To stop a certain behaviour?  Are you running from him?

2) Recognize God in the Storm: Not every storm that comes our way is sent by God, but some are. Even the ones that are not specifically sent by him can be used to his purpose – we need to ask him what he is calling us to even in the storm.

3) God can use our mistakes, no matter how big they may be.