Life can change in the blink of an eye.  As I was walking back from school with the boys today, I saw what I thought was a van reverse off a driveway just in front of me.  Only when the van stopped in the middle of the street did I realise that no one was in it.  It had simply rolled off the driveway.  Had it happened a few seconds later, I and the boys would have been walking immediately behind the van.  It scared me to realise how easily that van could have hit one or all of us. 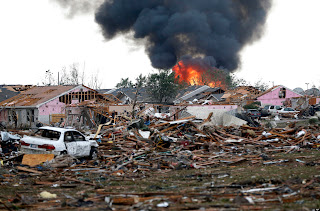 For the people Oklahoma the worse did happen, when on Monday afternoon a tornado roared through the district of Moore, destroying everything in its path, and leaving a scene of utter devastation, and claiming the lives of many people, including children who were at school. The Bible reading set for today (Tuesday 21 May) was Job chapter 2.  It seemed an appropriate reading, as the full extent of the disaster in Oklahoma was becoming apparent.

Like the people of Oklahoma, Job lost everything that was precious to him in the course of one day.  His servants were attacked and killed, his life stock stolen, his home destroyed, and worst of all his sons and daughters killed.

The book of Job explores the question of why do the innocent suffer.  In the Jewish mind, it was believed that suffering was a punishment for sin.  But it is made clear in the opening verses that Job was a good man.  As God says “Have you considered my servant Job? There is no one on earth like him; he is blameless and upright, a man who fears God and shuns evil.” (Job 1:8)  The point the book of Job makes, is that those who love God are not exempt from suffering.  Job himself recognises this, when he says to his wife “Shall we accept good from God, and not trouble?” (2:10)

Amongst the central characters of the book of Job, are Job’s three friends, Eliphaz, Bildad and Zophar.  On hearing what had happened to Job, went to him to comfort him.  When they saw Job, they wept at the transformation that had happened to him, and for seven days and nights sat with him, and didn’t say a word because they could see how great his suffering was.

According to Jewish tradition, people who come to comfort someone in mourning are not to speak until the mourner speaks.  In sitting with Job, they do the best thing possible, they are there for him.  Their presence shows solidarity with Job in his suffering.

When someone we know is suffering, we feel as though we need to try and say something spiritual or insightful to try and help them, or to say something that we hope will make things better – to the fix the problem, or to explain what has happened.  But as Job’s friends discover when they finally break their silence, sometimes silence is best!  Sometimes there are no words, and the best thing we can do is to simply be there for people, sitting with them, holding their hand, helping them to recognise that they are not alone in what they are going through.  Our presence, rather than our words, is what is so often valued.  I think this is one of the reasons why Jesus asked Peter, James and John to keep watch with Jesus in the Garden of Gethsemane.  He wanted their company, their presence.

Our presence, rather than pat answers or trite quotations is what is needed in times of crisis.  Emphatic silence and loving companionship can communicate much more than words could ever say.
Posted by Unknown at 18:39