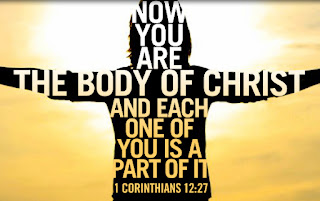 As a child one of my favourite books was Aesop’s Fables.  This is one of his short stories.

One day it occurred to the members of the body that they were doing all the work and that the belly was having all the food. So they held a meeting and after a long discussion decided to go on strike until the belly consented to take its proper share of the work. So for a day or two the hands refused to take the food, the mouth refused to receive it and the teeth had no work to do. But after a day or two members began to find that they themselves were not in very active condition. The hands could hardly move, the mouth was all parched and dry, while the legs were unable to support the rest. Thus they found that even the belly in its dull quiet way was doing necessary work for the body and that all must work together or the body would go to pieces.

Just as our human bodies are made up of different parts, so the church is composed of many parts, so that it may function as one body--the body of Christ. The emphasis is on the mutual dependence and concern of the various members of the body. As the organs of the human body--such as the eye, hand, head, and feet--need each other, so we also need each other.

Paul makes it clear that in the body of Christ we are ALL important no matter who we are, or what position we might have within the life of the church.  We all have a part to play in the body of Christ.  The eye cannot say to the hand, “I don’t need you!”  And the head cannot say to the feet, “I don’t need you!”  On the contrary, those parts of the body that seem to be weaker are indispensable.

If you look at an individual brick in a large wall, it might not seem that important.  But if you were to remove that brick the wall would become weaker as a result, because each brick helps give strength to the wall, each brick is an integral part of the overall structure.  In 1 Peter 2 we are described as the living stones, who are being made into a spiritual household, to be strong and to grow we need one another, each one of us has a part to play in God’s church.

When we become Christians we are not only called into a relationship with God, but also with one another, so that we can support and encourage one another.  If we are serious about our Christian faith, then we need to be serious about being part of God’s family the church.  When people say “I don’t need to go to church in order to be a Christian.”  My response is always, “We don’t GO to church, we ARE the church.”

The story is told of a vicar who went to visit a parishioner who had stopped going to church.  When the vicar got to the man’s house he found him sitting by the fire.  And without saying a word the vicar got the tongs and brought out one lump of coal from the flames and put it to one side.  For a few minutes the lump of coal continued to radiate heat and light, but eventually the lump of coal began to cool down.  Then the vicar put the now cool lump of coal back in the fire and slowly it began to radiate heat and light once more.  The man got the message, and said Thank you for the sermon vicar, I will see you in church on Sunday.

We need one another, we cannot live our Christian lives in isolation.  This is why the writer of Hebrews says “Let us not give up meeting together, as some are in the habit of doing, but let us encourage one another--and all the more as you see the Day approaching.” (Hebrew 10:25)

The second point that Paul makes is that we differ from one another.  Many parts, yet one body is Paul’s conclusion.  A body which is all eyes & ears is not a body.  Each member is unique, distinctive and irreplaceable.  We are to rejoice in our diversity, and learn from one another. And by the grace of God we have all been given gifts from the Holy Spirit, to be used for the common good.

The difficulties come when in the life of the church one or two people try to control or do everything.  Or when we see the ministry of the church as something that the Vicar or Minister is called and paid to do, and that we don’t have a role to play.  To use Paul’s imagery that would be like the eye saying, ‘Right I’m going to be in charge of everything from now on.’  But where would the sense of touch or smell be if we only used our eyes.  If we were to use only certain organs in our body and neglect others it would lead to atrophy.  And as soon as that happens the whole body becomes much weaker and poorer.

As the body of Christ we are called to live together in peace and love with people who are often very different to us.  This is why the church should be a sign of hope and reconciliation in the world.  Because it is God who has made us different, who also holds us together in unity.

Paul goes on to say that although the body is many diverse parts, we are all called to care for one another.  There should be no division in the body, but that its parts should have equal concern for each other.  If one part suffers, every part suffers with it; if one part is honoured, every part rejoices with it.

Mutual care, says Paul, is intrinsic to the body.  Paul illustrates this in two ways.  First, just as we pay particular attention to the less presentable parts of our physical bodies; we should be similarly ready to give special care to those in the body of Christ who might feel readily dispensable but are in fact vital to the health of the body.  Secondly, this care is to be expressed both by ‘rejoicing with those who rejoice’ and by ‘weeping with those who weep’.  We demonstrate care & love for one another when we enter into the joys & the sorrows of other members of the body.

This poses quite a challenge to us in our consumer culture, because the emphasis is always upon what we can get as consumers, and how we can have our needs met.  I think that this often extends into church life.  For instance do we come to church expecting our particular needs to be met, and possibly going home disappointed if it doesn’t happen, or do we come to church having thought and prayed about how we can serve and care for others?

The more we as the body of Christ care for one another, the more we will find our own individual needs met.  We find a great deal of security from knowing that ‘we belong to the body’, and also that we have a distinctive contribution to make to the body.

But we mustn’t just think of Christian service in terms of what takes place within church.  We are the body of Christ in the world, which we are called to serve.  Ministry is therefore a daily vocation.

Last week at St Martin’s we looked at the story of the miracle at the wedding at Cana in Galilee where water was turned into wine.  This miracle didn’t just benefit a select chosen few, it benefited everyone in the community.  Our calling as God’s people is to be a blessing, not just to those within the church, but to those beyond the church, to the whole community.

In our Gospel reading, Jesus’ laid out what his ministry was all about.

“The Spirit of the Lord is upon me, because he has anointed me to bring good news to the poor. He has sent me to proclaim release to the captives and recovery of sight to the blind, to let the oppressed go free to proclaim the year of the Lord’s favour.” (Luke 4:18-19)

This ministry that Jesus began, we as the body of Christ, the church, are called to continue.  Jesus said ‘as the Father has sent me, even so I send you.’(John 20:21)

There is both a physical and spiritual dimension to this ministry.  For example there are people in our world who are spiritually blind, who need their eyes opening to God’s love and purposes for their lives.  And there is also the problem of physical poverty, injustice and inequality in the world, which we are called to tackle.

I came across this quote from Chris Mead, who works for Christian Aid.  “This world we live in – the one we see out of our bedroom windows or on our TV screens – isn’t the world as it was meant to be.  Our global society is a photocopy of a photocopy of a photocopy, carbon smudged and toner burned, bearing little or no resemblance to the original template.”  Our calling as the church is to build the Kingdom of God on earth as in heaven, so that it represents God’s original template, and we do this by continuing the work Jesus started.  It is for this reason that Bill Hybels, a church leader in America, describes the local church as the “hope for the world.”

In Romans 12:5-12 Paul writes.  We are all part of his one body, and each of us has different work to do. And since we are all one body in Christ, we belong to each other, and each of us needs all the others. God has given each of us the ability to do certain things well. So if God has given you the ability to prophesy, speak out when you have faith that God is speaking through you. If your gift is that of serving others, serve them well. If you are a teacher, do a good job of teaching. If your gift is to encourage others, do it! If you have money, share it generously.  If God has given you leadership ability, take the responsibility seriously. And if you have a gift for showing kindness to others, do it gladly. Don’t just pretend that you love others. Really love them. Hate what is wrong. Stand on the side of the good. Love each other with genuine affection, and take delight in honouring each other. Never be lazy in your work, but serve the Lord enthusiastically.

We are the body of Christ in the world today, the hands to do his work, the feet to run his errands, and the voice to speak for him.

He has no hands but our hands
To do his work today;
He has no feet but our feet
To lead all in his way;
He has no voice but our voice
To tell all how he died;
He has no help but our help
To lead them to his side.