E100 Bible Reading Challenge: The Church is Born: Good News For All (75) 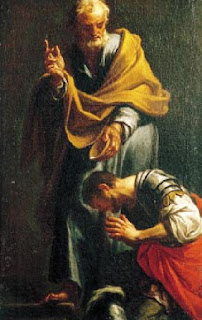 In Caesarea there was a man named Cornelius, a centurion of the Italian Cohort, as it was called. He was a devout man who feared God with all his household; he gave alms generously to the people and prayed constantly to God. One afternoon at about three o’clock he had a vision in which he clearly saw an angel of God coming in and saying to him, ‘Cornelius.’ He stared at him in terror and said, ‘What is it, Lord?’ He answered, ‘Your prayers and your alms have ascended as a memorial before God. Now send men to Joppa for a certain Simon who is called Peter; he is lodging with Simon, a tanner, whose house is by the seaside.’ When the angel who spoke to him had left, he called two of his slaves and a devout soldier from the ranks of those who served him,and after telling them everything, he sent them to Joppa.

About noon the next day, as they were on their journey and approaching the city, Peter went up on the roof to pray. He became hungry and wanted something to eat; and while it was being prepared, he fell into a trance. He saw the heaven opened and something like a large sheet coming down, being lowered to the ground by its four corners. In it were all kinds of four-footed creatures and reptiles and birds of the air. Then he heard a voice saying, ‘Get up, Peter; kill and eat.’ But Peter said, ‘By no means, Lord; for I have never eaten anything that is profane or unclean.’ The voice said to him again, a second time, ‘What God has made clean, you must not call profane.’This happened three times, and the thing was suddenly taken up to heaven.

Now while Peter was greatly puzzled about what to make of the vision that he had seen, suddenly the men sent by Cornelius appeared. They were asking for Simon’s house and were standing by the gate. They called out to ask whether Simon, who was called Peter, was staying there. While Peter was still thinking about the vision, the Spirit said to him, ‘Look, three men are searching for you. Now get up, go down, and go with them without hesitation; for I have sent them.’ So Peter went down to the men and said, ‘I am the one you are looking for; what is the reason for your coming?’ They answered, ‘Cornelius, a centurion, an upright and God-fearing man, who is well spoken of by the whole Jewish nation, was directed by a holy angel to send for you to come to his house and to hear what you have to say.’ So Peter invited them in and gave them lodging.

The next day he got up and went with them, and some of the believersfrom Joppa accompanied him. The following day they came to Caesarea. Cornelius was expecting them and had called together his relatives and close friends. On Peter’s arrival Cornelius met him, and falling at his feet, worshipped him. But Peter made him get up, saying, ‘Stand up; I am only a mortal.’ And as he talked with him, he went in and found that many had assembled; and he said to them, ‘You yourselves know that it is unlawful for a Jew to associate with or to visit a Gentile; but God has shown me that I should not call anyone profane or unclean. So when I was sent for, I came without objection. Now may I ask why you sent for me?’

Cornelius replied, ‘Four days ago at this very hour, at three o’clock, I was praying in my house when suddenly a man in dazzling clothes stood before me. He said, “Cornelius, your prayer has been heard and your alms have been remembered before God. Send therefore to Joppa and ask for Simon, who is called Peter; he is staying in the home of Simon, a tanner, by the sea.” Therefore I sent for you immediately, and you have been kind enough to come. So now all of us are here in the presence of God to listen to all that the Lord has commanded you to say.’

Then Peter began to speak to them: ‘I truly understand that God shows no partiality, but in every nation anyone who fears him and does what is right is acceptable to him. You know the message he sent to the people of Israel, preaching peace by Jesus Christ—he is Lord of all. That message spread throughout Judea, beginning in Galilee after the baptism that John announced: how God anointed Jesus of Nazareth with the Holy Spirit and with power; how he went about doing good and healing all who were oppressed by the devil, for God was with him. We are witnesses to all that he did both in Judea and in Jerusalem. They put him to death by hanging him on a tree; but God raised him on the third day and allowed him to appear, not to all the people but to us who were chosen by God as witnesses, and who ate and drank with him after he rose from the dead. He commanded us to preach to the people and to testify that he is the one ordained by God as judge of the living and the dead. All the prophets testify about him that everyone who believes in him receives forgiveness of sins through his name.’

While Peter was still speaking, the Holy Spirit fell upon all who heard the word. The circumcised believers who had come with Peter were astounded that the gift of the Holy Spirit had been poured out even on the Gentiles, for they heard them speaking in tongues and extolling God. Then Peter said, ‘Can anyone withhold the water for baptizing these people who have received the Holy Spirit just as we have?’ So he ordered them to be baptized in the name of Jesus Christ. Then they invited him to stay for several days.

Now the apostles and the believers who were in Judea heard that the Gentiles had also accepted the word of God. So when Peter went up to Jerusalem, the circumcised believers criticized him, saying, ‘Why did you go to uncircumcised men and eat with them?’ Then Peter began to explain it to them, step by step, saying, ‘I was in the city of Joppa praying, and in a trance I saw a vision. There was something like a large sheet coming down from heaven, being lowered by its four corners; and it came close to me. As I looked at it closely I saw four-footed animals, beasts of prey, reptiles, and birds of the air. I also heard a voice saying to me, “Get up, Peter; kill and eat.” But I replied, “By no means, Lord; for nothing profane or unclean has ever entered my mouth.” But a second time the voice answered from heaven, “What God has made clean, you must not call profane.” This happened three times; then everything was pulled up again to heaven. At that very moment three men, sent to me from Caesarea, arrived at the house where we were. The Spirit told me to go with them and not to make a distinction between them and us. These six brothers also accompanied me, and we entered the man’s house. He told us how he had seen the angel standing in his house and saying, “Send to Joppa and bring Simon, who is called Peter; he will give you a message by which you and your entire household will be saved.” And as I began to speak, the Holy Spirit fell upon them just as it had upon us at the beginning. And I remembered the word of the Lord, how he had said, “John baptized with water, but you will be baptized with the Holy Spirit.” If then God gave them the same gift that he gave us when we believed in the Lord Jesus Christ, who was I that I could hinder God?’ When they heard this, they were silenced. And they praised God, saying, ‘Then God has given even to the Gentiles the repentance that leads to life.’

KEY THOUGHT
The Church must welcome all who believe.

OVERVIEW
The over-riding result of this meeting between Peter and Cornelius was to clarify a fundamental truth about God’s Good News. salvation through Jesus Christ is for everyone, not just a select group of insiders. The Kingdom of Heaven is the ultimate “rainbow coalition.” It’s open to all who believe in Jesus Christ (10.43) and who therefore are able to receive the Holy Spirit (10.47).

CHALLENGE
OUR CHALLENGE TODAY IS TO KEEP THE CHURCH AS INCLUSIVE
Posted by Unknown at 17:34