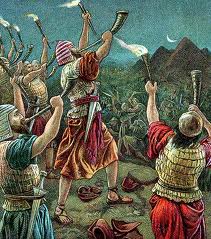 The Israelites did what was evil in the sight of the Lord, and the Lord gave them into the hand of Midian for seven years. The hand of Midian prevailed over Israel; and because of Midian the Israelites provided for themselves hiding-places in the mountains, caves and strongholds. For whenever the Israelites put in seed, the Midianites and the Amalekites and the people of the east would come up against them. They would encamp against them and destroy the produce of the land, as far as the neighbourhood of Gaza, and leave no sustenance in Israel, and no sheep or ox or donkey. For they and their livestock would come up, and they would even bring their tents, as thick as locusts; neither they nor their camels could be counted; so they wasted the land as they came in. Thus Israel was greatly impoverished because of Midian; and the Israelites cried out to the Lord for help.

When the Israelites cried to the Lord on account of the Midianites, theLord sent a prophet to the Israelites; and he said to them, ‘Thus says the Lord, the God of Israel: I led you up from Egypt, and brought you out of the house of slavery; and I delivered you from the hand of the Egyptians, and from the hand of all who oppressed you, and drove them out before you, and gave you their land; and I said to you, “I am theLord your God; you shall not pay reverence to the gods of the Amorites, in whose land you live.” But you have not given heed to my voice.’

The Calling of Gideon

Now the angel of the Lord came and sat under the oak at Ophrah, which belonged to Joash the Abiezrite, as his son Gideon was beating out wheat in the wine press, to hide it from the Midianites. The angel of the Lord appeared to him and said to him, ‘The Lord is with you, you mighty warrior.’ Gideon answered him, ‘But sir, if the Lord is with us, why then has all this happened to us? And where are all his wonderful deeds that our ancestors recounted to us, saying, “Did not the Lord bring us up from Egypt?” But now the Lord has cast us off, and given us into the hand of Midian.’ Then the Lord turned to him and said, ‘Go in this might of yours and deliver Israel from the hand of Midian; I hereby commission you.’ He responded, ‘But sir, how can I deliver Israel? My clan is the weakest in Manasseh, and I am the least in my family.’ The Lord said to him, ‘But I will be with you, and you shall strike down the Midianites, every one of them.’ Then he said to him, ‘If now I have found favour with you, then show me a sign that it is you who speak with me. Do not depart from here until I come to you, and bring out my present, and set it before you.’ And he said, ‘I will stay until you return.’

That night the Lord said to him, ‘Take your father’s bull, the second bull seven years old, and pull down the altar of Baal that belongs to your father, and cut down the sacred pole that is beside it; and build an altar to the Lord your God on the top of the stronghold here, in proper order; then take the second bull, and offer it as a burnt-offering with the wood of the sacred pole that you shall cut down.’ So Gideon took ten of his servants, and did as the Lord had told him; but because he was too afraid of his family and the townspeople to do it by day, he did it by night.

Gideon Destroys the Altar of Baal

When the townspeople rose early in the morning, the altar of Baal was broken down, and the sacred pole beside it was cut down, and the second bull was offered on the altar that had been built. So they said to one another, ‘Who has done this?’ After searching and inquiring, they were told, ‘Gideon son of Joash did it.’ Then the townspeople said to Joash, ‘Bring out your son, so that he may die, for he has pulled down the altar of Baal and cut down the sacred pole beside it.’ But Joash said to all who were arrayed against him, ‘Will you contend for Baal? Or will you defend his cause? Whoever contends for him shall be put to death by morning. If he is a god, let him contend for himself, because his altar has been pulled down.’ Therefore on that day Gideon was called Jerubbaal, that is to say, ‘Let Baal contend against him’, because he pulled down his altar.

Then all the Midianites and the Amalekites and the people of the east came together, and crossing the Jordan they encamped in the Valley of Jezreel. But the spirit of the Lord took possession of Gideon; and he sounded the trumpet, and the Abiezrites were called out to follow him.He sent messengers throughout all Manasseh, and they too were called out to follow him. He also sent messengers to Asher, Zebulun, and Naphtali, and they went up to meet them.

Gideon Surprises and Routs the Midianites

Then Jerubbaal (that is, Gideon) and all the troops that were with him rose early and encamped beside the spring of Harod; and the camp of Midian was north of them, below the hill of Moreh, in the valley.
The Lord said to Gideon, ‘The troops with you are too many for me to give the Midianites into their hand. Israel would only take the credit away from me, saying, “My own hand has delivered me.” Now therefore proclaim this in the hearing of the troops, “Whoever is fearful and trembling, let him return home.” ’ Thus Gideon sifted them out; twenty-two thousand returned, and ten thousand remained.

Then the Lord said to Gideon, ‘The troops are still too many; take them down to the water and I will sift them out for you there. When I say, “This one shall go with you”, he shall go with you; and when I say, “This one shall not go with you”, he shall not go.’ So he brought the troops down to the water; and the Lord said to Gideon, ‘All those who lap the water with their tongues, as a dog laps, you shall put to one side; all those who kneel down to drink, putting their hands to their mouths, you shall put to the other side.’ The number of those that lapped was three hundred; but all the rest of the troops knelt down to drink water. Then the Lord said to Gideon, ‘With the three hundred that lapped I will deliver you, and give the Midianites into your hand. Let all the others go to their homes.’ So he took the jars of the troops from their hands, and their trumpets; and he sent all the rest of Israel back to their own tents, but retained the three hundred. The camp of Midian was below him in the valley.

That same night the Lord said to him, ‘Get up, attack the camp; for I have given it into your hand. But if you fear to attack, go down to the camp with your servant Purah; and you shall hear what they say, and afterwards your hands shall be strengthened to attack the camp.’ Then he went down with his servant Purah to the outposts of the armed men that were in the camp. The Midianites and the Amalekites and all the people of the east lay along the valley as thick as locusts; and their camels were without number, countless as the sand on the seashore.When Gideon arrived, there was a man telling a dream to his comrade; and he said, ‘I had a dream, and in it a cake of barley bread tumbled into the camp of Midian, and came to the tent, and struck it so that it fell; it turned upside down, and the tent collapsed.’ And his comrade answered, ‘This is no other than the sword of Gideon son of Joash, a man of Israel; into his hand God has given Midian and all the army.’

When Gideon heard the telling of the dream and its interpretation, he worshipped; and he returned to the camp of Israel, and said, ‘Get up; for the Lord has given the army of Midian into your hand.’ After he divided the three hundred men into three companies, and put trumpets into the hands of all of them, and empty jars, with torches inside the jars, he said to them, ‘Look at me, and do the same; when I come to the outskirts of the camp, do as I do. When I blow the trumpet, I and all who are with me, then you also blow the trumpets around the whole camp, and shout, “For the Lord and for Gideon!” ’

So Gideon and the hundred who were with him came to the outskirts of the camp at the beginning of the middle watch, when they had just set the watch; and they blew the trumpets and smashed the jars that were in their hands. So the three companies blew the trumpets and broke the jars, holding in their left hands the torches, and in their right hands the trumpets to blow; and they cried, ‘A sword for the Lord and for Gideon!’Every man stood in his place all around the camp, and all the men in camp ran; they cried out and fled. When they blew the three hundred trumpets, the Lord set every man’s sword against his fellow and against all the army; and the army fled as far as Beth-shittah towards Zererah,as far as the border of Abel-meholah, by Tabbath. And the men of Israel were called out from Naphtali and from Asher and from all Manasseh, and they pursued after the Midianites.

How Can I Be Sure?

KEY THOUGHT
Seek God’s guidance and rely on his power. That’s the key to success.

OVERVIEW
Does Gideon’s request for “signs” reveal a lack of faith (6.17-40)? Probably not. If we genuinely seek God in faith, we can ask him to make his will clear and eventually he will. Real power and conviction comes when we prayerfully wait for confirmation from God. Gideon’s success was the result of two other things. he was empowered by the Spirit (6.34) and he was forced to rely on God’s power (7.2). That’s still a formula for success today.

CHALLENGE
WHEN GOD GIVES YOU A TASK, YOU CAN BE SURE HE’LL HELP YOU DO IT.