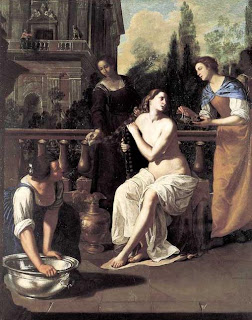 In the spring of the year, the time when kings go out to battle, David sent Joab with his officers and all Israel with him; they ravaged the Ammonites, and besieged Rabbah. But David remained at Jerusalem.

It happened, late one afternoon, when David rose from his couch and was walking about on the roof of the king’s house, that he saw from the roof a woman bathing; the woman was very beautiful. David sent someone to inquire about the woman. It was reported, ‘This is Bathsheba daughter of Eliam, the wife of Uriah the Hittite.’ So David sent messengers to fetch her, and she came to him, and he lay with her. (Now she was purifying herself after her period.) Then she returned to her house. The woman conceived; and she sent and told David, ‘I am pregnant.’

So David sent word to Joab, ‘Send me Uriah the Hittite.’ And Joab sent Uriah to David. When Uriah came to him, David asked how Joab and the people fared, and how the war was going. Then David said to Uriah, ‘Go down to your house, and wash your feet.’ Uriah went out of the king’s house, and there followed him a present from the king. But Uriah slept at the entrance of the king’s house with all the servants of his lord, and did not go down to his house. When they told David, ‘Uriah did not go down to his house’, David said to Uriah, ‘You have just come from a journey. Why did you not go down to your house?’ Uriah said to David, ‘The ark and Israel and Judah remain in booths; and my lord Joab and the servants of my lord are camping in the open field; shall I then go to my house, to eat and to drink, and to lie with my wife? As you live, and as your soul lives, I will not do such a thing.’ Then David said to Uriah, ‘Remain here today also, and tomorrow I will send you back.’ So Uriah remained in Jerusalem that day. On the next day, David invited him to eat and drink in his presence and made him drunk; and in the evening he went out to lie on his couch with the servants of his lord, but he did not go down to his house.

In the morning David wrote a letter to Joab, and sent it by the hand of Uriah. In the letter he wrote, ‘Set Uriah in the forefront of the hardest fighting, and then draw back from him, so that he may be struck down and die.’ As Joab was besieging the city, he assigned Uriah to the place where he knew there were valiant warriors. The men of the city came out and fought with Joab; and some of the servants of David among the people fell. Uriah the Hittite was killed as well. Then Joab sent and told David all the news about the fighting; and he instructed the messenger, ‘When you have finished telling the king all the news about the fighting, then, if the king’s anger rises, and if he says to you, “Why did you go so near the city to fight? Did you not know that they would shoot from the wall? Who killed Abimelech son of Jerubbaal? Did not a woman throw an upper millstone on him from the wall, so that he died at Thebez? Why did you go so near the wall?” then you shall say, “Your servant Uriah the Hittite is dead too.” ’

So the messenger went, and came and told David all that Joab had sent him to tell. The messenger said to David, ‘The men gained an advantage over us, and came out against us in the field; but we drove them back to the entrance of the gate. Then the archers shot at your servants from the wall; some of the king’s servants are dead; and your servant Uriah the Hittite is dead also.’ David said to the messenger, ‘Thus you shall say to Joab, “Do not let this matter trouble you, for the sword devours now one and now another; press your attack on the city, and overthrow it.” And encourage him.’

When the wife of Uriah heard that her husband was dead, she made lamentation for him. When the mourning was over, David sent and brought her to his house, and she became his wife, and bore him a son.

But the thing that David had done displeased the Lord, and the Lordsent Nathan to David. He came to him, and said to him, ‘There were two men in a certain city, one rich and the other poor. The rich man had very many flocks and herds; but the poor man had nothing but one little ewe lamb, which he had bought. He brought it up, and it grew up with him and with his children; it used to eat of his meagre fare, and drink from his cup, and lie in his bosom, and it was like a daughter to him.Now there came a traveller to the rich man, and he was loath to take one of his own flock or herd to prepare for the wayfarer who had come to him, but he took the poor man’s lamb, and prepared that for the guest who had come to him.’ Then David’s anger was greatly kindled against the man. He said to Nathan, ‘As the Lord lives, the man who has done this deserves to die; he shall restore the lamb fourfold, because he did this thing, and because he had no pity.’

Nathan said to David, ‘You are the man! Thus says the Lord, the God of Israel: I anointed you king over Israel, and I rescued you from the hand of Saul; I gave you your master’s house, and your master’s wives into your bosom, and gave you the house of Israel and of Judah; and if that had been too little, I would have added as much more. Why have you despised the word of the Lord, to do what is evil in his sight? You have struck down Uriah the Hittite with the sword, and have taken his wife to be your wife, and have killed him with the sword of the Ammonites.Now therefore the sword shall never depart from your house, for you have despised me, and have taken the wife of Uriah the Hittite to be your wife. Thus says the Lord: I will raise up trouble against you from within your own house; and I will take your wives before your eyes, and give them to your neighbour, and he shall lie with your wives in the sight of this very sun. For you did it secretly; but I will do this thing before all Israel, and before the sun.’ David said to Nathan, ‘I have sinned against the Lord.’ Nathan said to David, ‘Now the Lord has put away your sin; you shall not die. Nevertheless, because by this deed you have utterly scorned the Lord, the child that is born to you shall die.’ Then Nathan went to his house.

The Lord struck the child that Uriah’s wife bore to David, and it became very ill. David therefore pleaded with God for the child; David fasted, and went in and lay all night on the ground. The elders of his house stood beside him, urging him to rise from the ground; but he would not, nor did he eat food with them. On the seventh day the child died. And the servants of David were afraid to tell him that the child was dead; for they said, ‘While the child was still alive, we spoke to him, and he did not listen to us; how then can we tell him the child is dead? He may do himself some harm.’ But when David saw that his servants were whispering together, he perceived that the child was dead; and David said to his servants, ‘Is the child dead?’ They said, ‘He is dead.’

Then David rose from the ground, washed, anointed himself, and changed his clothes. He went into the house of the Lord, and worshipped; he then went to his own house; and when he asked, they set food before him and he ate. Then his servants said to him, ‘What is this thing that you have done? You fasted and wept for the child while it was alive; but when the child died, you rose and ate food.’ He said, ‘While the child was still alive, I fasted and wept; for I said, “Who knows? The Lord may be gracious to me, and the child may live.” But now he is dead; why should I fast? Can I bring him back again? I shall go to him, but he will not return to me.’

Then David consoled his wife Bathsheba, and went to her, and lay with her; and she bore a son, and he named him Solomon. The Lord loved him, and sent a message by the prophet Nathan; so he named him Jedidiah, because of the Lord.

KEY THOUGHT
We all sin. But if we truly repent, God will forgive us.

OVERVIEW
How could David, the man “after God’s own heart” commit adultery, arrange a murder and then cover it up? The biggest mistake we can make is to think sin won’t get to us. That’s why it’s so important to be part of a Christian community that can hold us accountable. When David was confronted with his sin (12.1-10) he immediately and genuinely repented (12.13 and Psalm 51). It can be incredibly difficult to admit our sin. But when we do, God removes the burden forever.

CHALLENGE
SIN MAY INFECT YOU BUT GOD WILL PROTECT YOU.
Posted by Unknown at 13:42