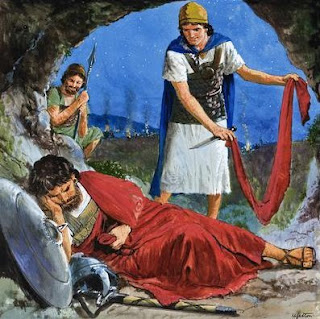 Now it was told Saul that David had come to Keilah. And Saul said, ‘God has given him into my hand; for he has shut himself in by entering a town that has gates and bars.’ Saul summoned all the people to war, to go down to Keilah, to besiege David and his men. When David learned that Saul was plotting evil against him, he said to the priest Abiathar, ‘Bring the ephod here.’ David said, ‘O Lord, the God of Israel, your servant has heard that Saul seeks to come to Keilah, to destroy the city on my account. And now, will Saul come down as your servant has heard? O Lord, the God of Israel, I beseech you, tell your servant.’ TheLord said, ‘He will come down.’ Then David said, ‘Will the men of Keilah surrender me and my men into the hand of Saul?’ The Lord said, ‘They will surrender you.’ Then David and his men, who were about six hundred, set out and left Keilah; they wandered wherever they could go. When Saul was told that David had escaped from Keilah, he gave up the expedition. David remained in the strongholds in the wilderness, in the hill country of the Wilderness of Ziph. Saul sought him every day, but the Lord did not give him into his hand.

David Eludes Saul in the Wilderness

David was in the Wilderness of Ziph at Horesh when he learned that Saul had come out to seek his life. Saul’s son Jonathan set out and came to David at Horesh; there he strengthened his hand through theLord. He said to him, ‘Do not be afraid; for the hand of my father Saul shall not find you; you shall be king over Israel, and I shall be second to you; my father Saul also knows that this is so.’ Then the two of them made a covenant before the Lord; David remained at Horesh, and Jonathan went home.

Then some Ziphites went up to Saul at Gibeah and said, ‘David is hiding among us in the strongholds of Horesh, on the hill of Hachilah, which is south of Jeshimon. Now, O king, whenever you wish to come down, do so; and our part will be to surrender him into the king’s hand.’Saul said, ‘May you be blessed by the Lord for showing me compassion!Go and make sure once more; find out exactly where he is, and who has seen him there; for I am told that he is very cunning. Look around and learn all the hiding-places where he lurks, and come back to me with sure information. Then I will go with you; and if he is in the land, I will search him out among all the thousands of Judah.’ So they set out and went to Ziph ahead of Saul.

When Saul returned from following the Philistines, he was told, ‘David is in the wilderness of En-gedi.’ Then Saul took three thousand chosen men out of all Israel, and went to look for David and his men in the direction of the Rocks of the Wild Goats. He came to the sheepfolds beside the road, where there was a cave; and Saul went in to relieve himself. Now David and his men were sitting in the innermost parts of the cave. The men of David said to him, ‘Here is the day of which the Lord said to you, “I will give your enemy into your hand, and you shall do to him as it seems good to you.” ’ Then David went and stealthily cut off a corner of Saul’s cloak. Afterwards David was stricken to the heart because he had cut off a corner of Saul’s cloak. He said to his men, ‘The Lord forbid that I should do this thing to my lord, the Lord’s anointed, to raise my hand against him; for he is the Lord’s anointed.’So David scolded his men severely and did not permit them to attack Saul. Then Saul got up and left the cave, and went on his way.

Afterwards David also rose up and went out of the cave and called after Saul, ‘My lord the king!’ When Saul looked behind him, David bowed with his face to the ground, and did obeisance. David said to Saul, ‘Why do you listen to the words of those who say, “David seeks to do you harm”? This very day your eyes have seen how the Lord gave you into my hand in the cave; and some urged me to kill you, but I spared you. I said, “I will not raise my hand against my lord; for he is the Lord’s anointed.” See, my father, see the corner of your cloak in my hand; for by the fact that I cut off the corner of your cloak, and did not kill you, you may know for certain that there is no wrong or treason in my hands. I have not sinned against you, though you are hunting me to take my life. May the Lord judge between me and you! May the Lordavenge me on you; but my hand shall not be against you. As the ancient proverb says, “Out of the wicked comes forth wickedness”; but my hand shall not be against you. Against whom has the king of Israel come out? Whom do you pursue? A dead dog? A single flea? May theLord therefore be judge, and give sentence between me and you. May he see to it, and plead my cause, and vindicate me against you.’

When David had finished speaking these words to Saul, Saul said, ‘Is that your voice, my son David?’ Saul lifted up his voice and wept. He said to David, ‘You are more righteous than I; for you have repaid me good, whereas I have repaid you evil. Today you have explained how you have dealt well with me, in that you did not kill me when the Lord put me into your hands. For who has ever found an enemy, and sent the enemy safely away? So may the Lord reward you with good for what you have done to me this day. Now I know that you shall surely be king, and that the kingdom of Israel shall be established in your hand. Swear to me therefore by the Lord that you will not cut off my descendants after me, and that you will not wipe out my name from my father’s house.’ So David swore this to Saul. Then Saul went home; but David and his men went up to the stronghold.

KEY THOUGHT
When treated unfairly, our first impulse should turn us to God.

OVERVIEW
Saul had an impulse for doing things his own way instead of God’s (1 Samuel 13.1-15; 15.10). David’s impulse, in contrast, was to trust God in every situation. When he had every right to kill Saul in selfdefense, David preferred to let God do things his way (24.12). Have you been unfairly treated or wronged by someone? It rarely helps to “give them a
taste of their own medicine.” Far better to pray, “Lord, this is not fair and I’m angry about it, but I’m determined to make choices that please you.”

CHALLENGE
FEELING ANGRY? DON’T LASH OUT. LOOK UP AND DO WHAT PLEASES GOD.
Posted by Unknown at 08:15