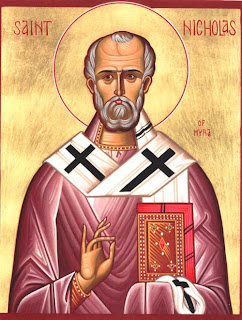 Ask children what they associate most with Christmas, and I suspect the answer you would get is Santa Claus.  But did you know that Santa Claus is based on a very real person, Saint Nicholas, who is commemorated by the church on December 6th?

Saint Nicholas was born in the village of Patara, in what is now part of Turkey.  He was raised to be a devout Christian by his wealthy parents.  They died when he was young, and left him their fortune.  Obeying Jesus’ words to “sell what you own and give the money to the poor,” Nicholas used his inheritance to assist the needy, the sick and the suffering.  He dedicated his life to serving God and was made Bishop of Myra.

Nicholas led his churches through one of the worst times of persecution in Christian history.  In AD 303 the Roman Emperor Diocletian ordered a brutal attack on all Christians.  Those suspected of being followers of Jesus were ordered to make sacrifices to pagan gods.  Nicholas and thousands of others refused, and he was imprisoned and tortured, but he refused to renounce his faith.  He was eventually freed from prison by the new Emperor Constantine, and continued to serve as bishop in Myra for another 30 years, where through his witness thousands of people came to faith in Jesus.  He died on December 6, 343 AD, and was buried in his cathedral church.

Through the centuries many stories and legends have been told of Saint Nicholas' life and deeds.  One of the most famous stories tells of a poor man who could not afford the dowries to enable his three daughters to marry.  They were therefore destined to be sold into slavery and prostitution.  Saint Nicholas heard of their plight, and at night threw a bag of gold coins through an open window, which was said to have landed in stockings left by the fire to dry.  This led to the custom of children hanging stockings, eagerly awaiting gifts from Saint Nicholas.
Santa Claus of yuletride tradition still has some echoes of this great saint.  The colour of his outfit recollects the red of the bishop’s roes, and gifts secretly brought on Christmas Eve remind us of his generosity to the poor.   So this Christmas, why not tell children the story of the real Santa Claus to inspire them to follow his example of Christian love and service.