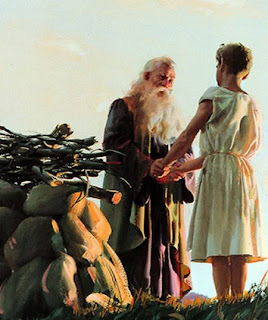 OVERVIEW
God tells Abraham to sacrifice his only son Isaac (Gen. 22.2) and Abraham wastes no time obeying. As the tension mounts in front of the altar, Abraham unwittingly prophesies God’s plan of salvation when he says “God himself will provide the lamb for the burnt offering.” (Gen. 22.8). God did provide the lamb for Abraham. He also provided the
Lamb, his only son Jesus Christ as the once and for all sacrifice for our sins.

CHALLENGE
WILL YOU ACCEPT GOD’S INVITATION AND RECEIVE HIS SALVATION?
Posted by Unknown at 16:10