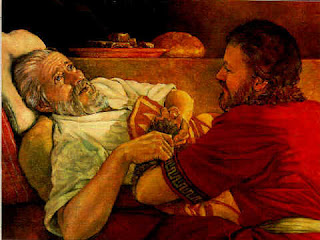 KEY THOUGHT
We often encounter God in the broken places of our lives.

OVERVIEW
A permissive father, a controlling mother, an errant older son and a deceptive younger son. It sounds like reality TV. But Isaac’s family is one of the most important in the Bible because God used it to build the nation of Israel. Of course, no family is perfect. God uses broken people from broken families to accomplish his perfect purposes. He has no other choice. And he can use our brokenness to draw us closer to himself, also.

CHALLENGE
BRING THE BROKEN PARTS OF YOUR LIFE TO GOD FOR HEALING.
Posted by Unknown at 16:15