Your Money And Your Life

The American industrialist, Henry Ford, was once asked to donate money for the construction of a new medical facility in Ireland. The billionaire pledged to donate $5,000. The next day in the newspaper, the headline read, "Henry Ford contributes $50,000 to the local hospital." The irate Ford was on the phone immediately to complain to the fund-raiser that he had been misunderstood. The fund-raiser replied that they would print a retraction in the paper the following day to read, "Henry Ford reduces his donation by $45,000." Realizing the poor publicity that would result, the industrialist agreed to the $50,000 contribution in return for the following: That above the entrance to the hospital was to be carved the biblical inscription: "I came among you and you took me in."

During the course of the year we have been thinking about what it means to be a disciple of Jesus.  One of the essential marks of being a disciple is generosity – being generous with our time, talents and money. 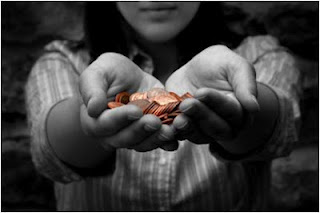 But there is often a reluctance to talk about money in church – maybe because some people see it as an unspiritual topic, or maybe simply because it touches a raw nerve.    But if we are serious about being fully committed disciples, then we cannot ignore the subject of money and giving.  It was something that Jesus felt was very important, because of the 29 parables that we have recorded, 16 deal with the subject of money, and in Matthew, Mark and Luke 1 out of every 6 verses deals with the topic of money.  Therefore it is not something we can ignore.

It has been said that very often when someone becomes a Christian the very last thing to be converted is their wallet or purse.  If you want to know what is really important to someone, I suggest a good place to start is to look at their bank statement, because that will tell you a lot about their true priorities.   As Jesus said “For where your treasure is, there your heart will be also.”

When the topic of giving is raised, the question that is often asked is ‘how much should we give?’

A family went to church one Sunday morning, and after the service the mother commented, ‘The choir was awful this morning.’ The father commented ‘The sermon was too long’.  Their seven year old daughter added, ‘But you’ve got to admit it was a pretty good show for £1.’

Is there a correct amount that we should give?  Many Christians try to follow the principle of tithing, giving away one tenth of their income.  Tithing is an Old Testament concept, in which all Israelites were expected to give 10% of everything they earned and grew to the Temple.  In fact quite often people gave multiple tithes, so they would have given much more than the 10% that we now associate with the tithe.

Many people find tithing a helpful way of determining how much they should give.

J.D. Rockefeller the American industrialist and philanthropist said "I never would have been able to tithe the first million dollars I ever made if I had not tithed my first salary, which was $1.50 per week."  The Church of England encourages people to tithe, and as a church we tithe 10% of our income to charities.

But when it comes to the issue of giving, the New Testament doesn’t say how much we should give, all it says is that we should give generously and proportionately.

CS Lewis said “I do not believe one can settle how much we ought to give. I am afraid the only safe rule is to give more than we can spare.”

In our reading from Acts when Agabus prophesied that a severe famine would spread over the entire Roman world, we told that: ‘The disciples, as each one was able, decided to provide help for the brothers and sisters living in Judea.’ (Acts 11:30) We should each diligently pray and seek God’s wisdom as to how much we should be giving.  Paul writing about giving to the church in Corinth said “Each of you should give what you have decided in your heart to give, not reluctantly or under compulsion, for God loves a cheerful giver.’ (2 Cor 9:7)

Giving is not intended to be a heavy burden.   Jesus said, it is more blessed to give than to receive (Acts 20:35).  There is real grace in being able to give.  When you love someone, there is pleasure found in being able to give them gifts, because through that gift we express the love we have for them.  The same should be true when it comes to giving to God.  There is something incredibly liberating and joyful in being able to give to God. This is something the novelist John Grisham has found, he said in an interview in USA Today ‘My wife and I measure the success of the year on how much we give away.”

It is often the case that as a person’s faith grows so does their giving.  This is because our giving to God should be in direct response to all that God has given us.  God is a giver, and he wants us to be like Him, generous with all that we have, and to recognise that everything we have ultimately comes from God, and therefore we give back to God what he has given to us.  Therefore the question we need to ask ourselves is not “How much of my money shall I use for God?” but “How much of God’s money shall I use for myself?”

In 2 Corinthians Paul describes how although very poor themselves, the churches of Macedonia gave generously to support their fellow brothers and sisters in Judea.  Paul writes “In the midst of a very severe trial, their overflowing joy and their extreme poverty welled up in rich generosity. For I testify that they gave as much as they were able, and even beyond their ability. Entirely on their own, they urgently pleaded with us for the privilege of sharing in this service to the Lord’s people.  And they exceeded our expectations: They gave themselves first of all to the Lord, and then by the will of God also to us… see that you also excel in this grace of giving.” (2 Cor 8:2-5, 7)

What we see from the example of the Macedonian Christians is that even though they were themselves poor they gave freely without compulsion, sacrificially and joyfully.  And that they saw being able to give not as a burden but as a privilege.  The point of giving is not so much the amount we give, but why and how we give.  God does not want gifts given grudgingly.  Instead he wants us to give as Macedonian church did – out of dedication to him, love for fellow believers and the joy of helping those in need.
Our giving is to support others

It is the opportunity to help others less fortunate than ourselves which is an important aspect of giving.  In our Gospel reading Jesus says “when you give to the needy” (Mt 6:2) it’s clear that as Christians we have a duty to support those who are not as fortunate as we are.  This is one of the blessings associated with giving, it helps us to value and appreciate what we have, and not to take it for granted, and to use the things God has given to us in order to bless others.

Our giving should be done discreetly

Jesus goes on to say that our giving should be done discreetly. “When you give to the needy, do not let your left hand know what your right hand is doing, so that your giving may be in secret. Then your Father, who sees what is done in secret, will reward you.” (Mt 6:3-4)

When we give we shouldn’t do it to make us look good in the eyes of others, to do it for selfish, self centred reasons, but we should do it to honour God, and help others.
The great Baptist preacher Charles Spurgeon and his wife were labelled by some people as greedy and grasping because they refused to give away the eggs their chickens laid, instead they sold them.

The Spurgeon’s accepted the criticisms without defending themselves.  It was only after Mrs. Spurgeon died was the full story revealed. All the profits from the sale of eggs went to support two elderly widows. Because the Spurgeon’s where unwilling to let their left hand know what the right hand was doing, they endured the attacks in silence.
I came across this quote, “Do not give, as many rich men do, like a hen that lays an egg, and then cackles.”

Our giving needs to be planned

In the Bible when people tithed they gave the best first fruits to God.  There is a principle here for us to follow which is that giving should be something that is planned and thought through.  We should give what is right, not just what is left.  Giving should not be an afterthought, but something that we see as a priority.  It is therefore extremely important to prayerfully and realistically reviewing our giving at least once a year.  Many people find doing this at the start of a new tax year is a good time, but it doesn’t matter when you do it, as long as you do it regularly.

How much we give will very much depend upon our different circumstances, which will change throughout our lives.  But as we reflect on our giving it is worth considering what we spend on other things, like hobbies, holidays, going out for meals or to the cinema or theatre, or buying a daily newspaper.  How does this compare to what we give to God?  It’s not just how much you’ve given, but how much you’ve kept that matters.

There is a real joy in being able to give, and as Christians it we have an awesome privilege in being able to help others through our giving.  So let’s not only give generously, but even more importantly let us be people who live generously, who reflect an open-hearted, open-minded and open-handed life, because this is what it means to be a disciple of Christ.